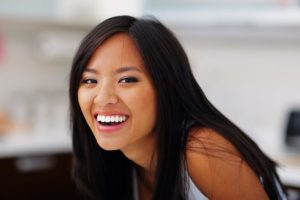 How often to you hear someone say, “I’ve got to go scrape my tongue.” Odds are, you never have. While we talk about brushing and flossing, the important step of keeping our tongue clean and bacteria free is frequently overlooked.

Can you imagine going to your dentist in Stuart for a cleaning and discovering there was almost nothing there to clean? That’s exactly what happened to one woman who wrote about what happened when she began tongue scraping – and, while that can’t be guaranteed, by making it part of your regular oral hygiene routine, those cleaning visits are sure to be a lot quicker and more pleasant.

While tongue scraping may sound like a painful practice, it’s anything but. This ancient self-care ritual simple removes food debris, bacteria, fungi, toxins and dead cells from the surface of the tongue. It’s one of the best defenses against bad breath – when done regularly, ideally right before bedtime, your morning breath is likely to be fresher than ever.

That’s because your soft, spongy tongue is the ideal breeding ground for bacteria. When you scrape that gunk off your tongue, the odor-causing bacteria and other toxins are removed with it. The less bacteria you have, the less it will smell.

If you’re thinking about just using your toothbrush to try and remove all that gunk, unfortunately that’s not really an option as it’s unable to remove micro-organisms from the tongue, according to veteran registered dental hygienist Kim Shamoun who says she “can’t live without tongue scraping.”

Tongue scraping requires a solid surface, ideally a stainless steel tongue scraper, to really get it clean. It’s quick and easy to use, but it’s important to scrape your tongue as soon as possible after getting out of the bed in the morning, before you head for that coffee, drink anything or brush your teeth. All you have to do is open wide as if you were at the office of your dentist in Stuart, stick out your tongue and glide the scraper over it, starting from the back and rinsing after each scrape. Repeat at least four times, or until the scraper comes clean, which means all of the gunk is gone. Do the same thing just before bed.

Start scraping sooner rather than later and both you and your dentist in Stuart are sure to be pleasantly surprised!