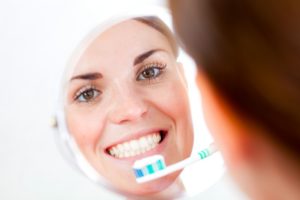 Memorial Day is just around the corner, and you probably have a big barbecue planned. As the official kick off for summer, this holiday just wouldn’t be the same without a fun backyard or park get together, but it also comes with some drawbacks as your dentist in Stuart will tell you: typical BBQ foods and drinks can wreak havoc on your teeth.

Barbecue sauce, and other dark sauces, are bad for your teeth. They not only tend to stain, but many are loaded with sugar and are rather sticky, which makes it harder to remove from your teeth. Ideally, you should skip the barbecue sauce and opt for a lighter marinade instead – grilled chicken breasts marinated in orange juice, lime juice, mint and just a bit of honey are especially tasty and are much less damaging to the teeth.

If you’re unable to resist, you can help combat the staining of barbecue sauce by brushing your teeth as soon as possible after eating, or at least swish some water around in your mouth to rinse it off – that way, your dentist in Stuart, and your teeth, will certainly thank you at your next visit.

Corn on the cob

While corn on the cob is one of the healthier foods at a Memorial Day BBQ, the problem is that it often gets stuck in between the teeth. That’s not only a nuisance, but it can force your teeth to separate, cause fillings to dislodge and even chippings to occur, particularly if your teeth are weak to begin with. Consider cutting the kernels off the cob to avoid potential damage, or at least brush and floss thoroughly right after your meal to avoid an unexpected trip to your dentist in Stuart.

You already know that sugar drinks are bad for your teeth, and that not only includes soda, but unassuming culprits like sweet martinis, mixed alcoholic drinks, sports beverages, lemonade and even flavored waters. And, it’s not just the sugar that does damage. While nothing quite says summer like a fresh-squeezed glass of lemonade or a cold beer, those beverages tend to be quite acidic, which means they can wear away the enamel on your teeth.

Quench your thirst instead with iced green tea without added sugar, or mineral water with a squeeze of lime. If you do indulge, moderation is key – and, once again, brushing is your best friend when it comes to sugary and/or acidic drinks.